Apple is expected to launch its 2019 iPhones on Tuesday, September 10 and the public release of iOS 13 is expected a few days later. But if you thought that we were done with iOS 12 releases, think again.

In the last few hours, Apple has updated iOS to 12.4.1 and the update is now live and available. Apple has also released updates to watchOS, tvOS and macOS. 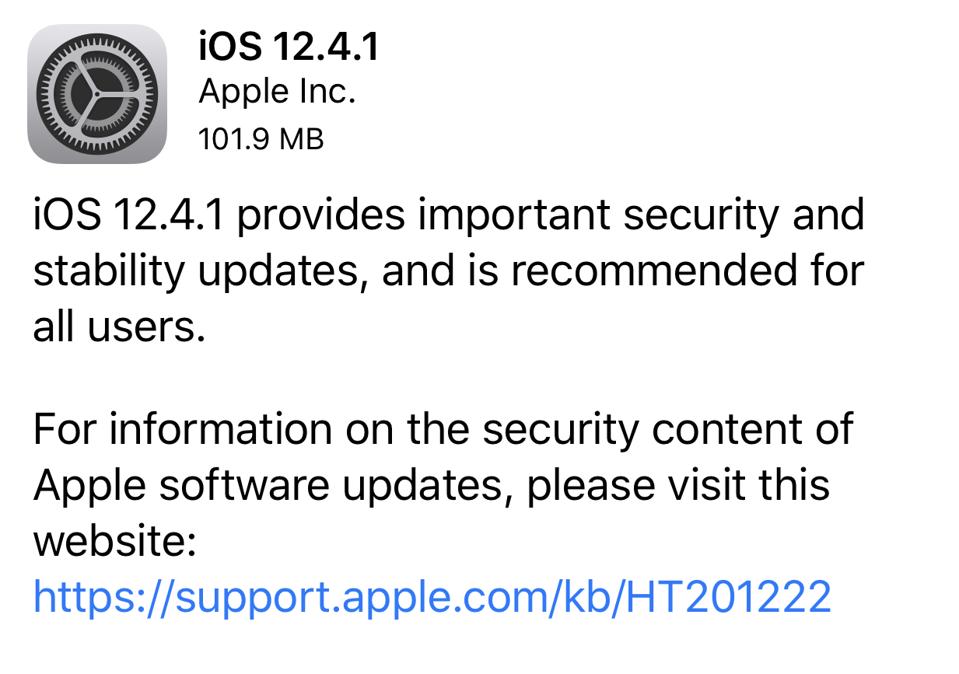 What’s in the update?

It’s a patch to fix a vulnerability, one that could affect iPhones, from 5s onwards, iPads dating back to the iPad Air and the iPod touch sixth-generation model.

The vulnerability meant that these devices could be open to jailbreaking. And if your iPhone can be jailbroken, it can be hacked.

If this bug sounds familiar, it’s because this is an issue that was fixed in May with the arrival of iOS 12.3.

However, when the next big release, iOS 12.4, arrived in July, it accidentally undid the good work of 12.3, rendering users vulnerable again. The vulnerability was reported to Apple by Google, specifically its Project Zero team.

Apple has acknowledged the involvement of Project Zero among the release notes for iOS 12.4.1 and goes on to “acknowledge @Pwn20wnd for their assistance”.

This fix is the only element detailed in Apple’s security content information for the update, though that doesn’t mean there aren’t other bugs being squished underfoot here as well.

Apple will be hoping there are no other unforeseen consequences from this latest update. If more wrinkles become evident, we’ll detail them here, so please check back. 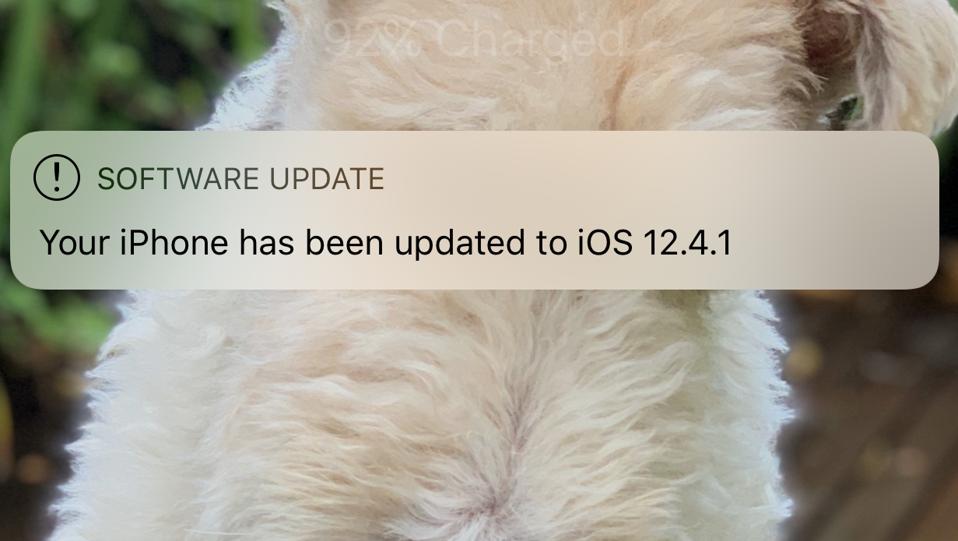 How to get it

You’ll know the drill by now, but if not, it’s pretty straightforward to download the update. Open the Settings app, tap General, then Software Update. Note that it can take a little while sometimes for all eligible devices to be ready to download it. It’s a reasonably small update, so it shouldn't take long to download and install.

Here is a summary of all earlier iOS 12 updates, compiled by Forbes contributor Amit Chowdhry.

Released on July 22, 2019, this was the Apple Card release, although we didn’t know it at the time. Only when the Apple Card went on sale did we discover that the software was capable of working with the new card. It introduced a new way of transferring data from one iPhone to another and improved Apple News downloads. In conjunction with an update to watchOS, it restored Walkie-Talkie to Apple Watch. Apple users in Japan and Taiwan found they had support for HomePod with this release.

This version was released on June 11, 2019 and was aimed only at one subset of iPhone users: those with an iPhone 8 Plus. The owners of this model might have found an issue with Portrait mode, specifically that images taken in this setting would have actually been taken without the portrait effect working. This update was entirely about fixing that issue.

This version was released on May 24, 2019 and was mostly about squishing bugs – though the fact that it came so soon after the release of iOS 12.3 suggests there was an air of urgency about it.

Topmost among these is an issue that could prevent VoLTE calls happening, in both directions.

As you’ll know VoLTE means Voice over LTE and reflects the fact that voice calls have for some time now been made on 4G – something that will continue when 5G services are live, I believe.

There were also issues affecting Messages including junk messages. The link that allows you to report messages from unknown senders as junk may have been going missing and this update made sure that it’s back.

This version of iOS launched on May 13, 2019 and was all about Apple TV. It completely redesigned the app on iOS (and tvOS as well) adding support for AirPlay 2-enabled smart TVs, building TV channels into the app and the capability to subscribe to them from within the app. A new kids’ section and extra recommendations were also added.

Bugs were also taken care of that address issues where calls on wi-fi calling could drop, for instance.

iOS 12.2, released on March 25, 2019, included support for Apple News+, the ability for Siri to play videos from iOS devices to Apple TV, four new emoji, dedicated TV controls in the Control Center, the ability for Apple Pay Cash customers to transfer money to their bank accounts instantly using Visa debit cards, support for the second-generation model of AirPods and a number of bug fixes and improvements.

Wallet app started displaying Apple Pay credit and debit transactions right below the card, Screen Time added the capability of being configured with a different schedule for each day of the week and a new toggle enabled easily turning app limits on or off temporarily.

iOS 12.1.4 (released on February 7, 2019) is mostly known for fixing a shocking iOS bug, which meant you could get at the audio and video of any iPhone running iOS 12.1 or later without being detected through a FaceTime call Apple issued an apology while it was working on a fix for this issue.

And iOS 12.1.4 also fixed a bug where an app would be able to gain elevated privileges and an issue with Live Photos in FaceTime, among other issues.

iOS 12.1.3 (released on January 22, 2019) fixed an issue in the Messages app which affected how photos were displayed. It also sorted an audio distortion issue when using external audio input devices on iPad Pro (2018). And iOS 12.1.3 resolved an issue that caused some CarPlay systems to disconnect from the 2019 iPhones.

This update also fixed several issues with the HomePod speaker.

The second version of iOS 12.1.2 (released on December 20, 2018) — known as build 16C104 — replaced the previous version, possibly to introduce stability improvements though details were scant.

The first iOS 12.1.2 update (released on December 17, 2018) included bug fixes and a potential workaround for Qualcomm's patents, which Apple had been found to be violating, as a result of which a sales ban on the Apple iPhone 6s through the Apple iPhone X had been ordered.

In China, the iOS 12.1.2 update altered how apps were force closed and adjusted the share sheet user interface of the share sheet for setting contacts and wallpapers. This update also addressed issues associated with eSIM activation for the 2019 iPhones.

iOS 12.1.1 (released on December 5, 2018) integrated notification preview using Haptic Touch on the iPhone XR. And Dual SIM with eSIM support was added for the 2019 iPhones.

And iOS 12.1.1 added a one-tap-to-flip feature between the rear- and front-facing cameras during a FaceTime call. Live Photo capture during one-to-one FaceTime calls was also added.

The iOS 12.1.1 update allowed users to hide the sidebar while viewing the News app in landscape mode on the iPad.

The second version of iOS 12.1 (released on November 6, 2018) included a maintenance update for the iPhone XR.

iOS 12.1 (released on October 30, 2018) included features which had been promised when the software was announced but not implemented. These included Group FaceTime, 70 new emoji, depth control in the Camera app and dual SIM support.

iOS 12.0.1 (released on October 8, 2018) was mostly a bug-squasher, including charging issues, for instance. It also restored the original placement of the “.?123” key on iPad keyboards.

The first release of this major iOS update (released on September 15, 2018) shipped with plenty of new elements. These ranged from Do Not Disturb enhancements, notification grouping and more The new Measure app which uses Augmented Reality to let you measure things by waving the iPhone in the air, is a favorite of mine. Books, Stocks and News apps were redesigned and significant upgrades were applied to the Voice Memos app.